Our free, private and encrypted file- and media-sharing service! 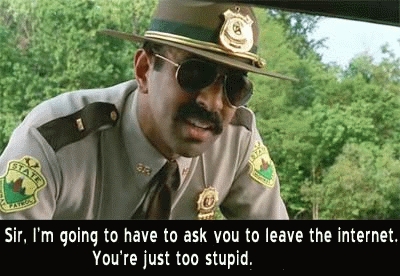 I had the great "pleasure" of wasting some time on an extremely silly and even more pointless group on FB: the 2600 one, so here is my judgement.

first of all, on Facebook? really? how much of a hacking mindset can you have when getting on your knees and sucking the smelly cock of FB TOS and therefore having to censor your oh-so-high-valued free speech on every single thread just to avoid getting your lame asses banned by one of those faceless corporations you all hate so much (and obviously can't stop talking about HOW MUCH you hate those evil evil eviiiiil corporate capitalists)? and no, please don't come up with silly arguments like "rocking the cardbox from the inside, that's why we use FB"...the truth is: none of you has the balls, money and skills to run a community website. and again, don't come up with silly arguments like "but 2600 has a website!", because: no, it hasn't. what is has is a ugly pile of 90's-looking crapcode that is all about wanking money out of people by selling your retarded zine. I could set up that site in Wordpress within 30 minutes with even more and up to date features. btw, one thing that REALLY made me laugh on this "site" was the announcement of a meeting at...now fasten your seatbelts: Burger King. holy shanizzlez...being on FB and meeting at Burger King...oh you subversive rebels!

next point, let's have a look at the topics on this valuable FB group (as valuable as a fart under a blanket I mean). what obviously moves the mind of the modern "hackers" (see that as placeholder term for now, I will define the average 2600 FB member later) nowadays is: 3D printing guns, Bradley Manning, and, of course, as biggest part, the Adrian Lamo show. concept of the Adrian Lamo show is to brag and brag and brag endlessly about yourself and how famous you are (10 cent for each of his threads that starts with "people often ask me..." and I would be Jon Lajoie rich) without actually having done ANYTHING valuable except maybe for a silly hack more than 10 years ago. I don't go into that "snitch" thing, because I don't give a rat's ass about the cult of Lamo OR Annoymuch.

aaand next: the users. oh my gawd. where am I supposed to start. let's hit this in a mathematical way, ok?

- people that can actually code (I am generous and would even count the ability to do "Hello World!" in Bash): 5%

- people with a politically correct mindset (which is quite the exact opposite of the hacker's mindset because those people are locked inside their self-censored self-righteous thought ghetto and are not capable to think outside the box): 90%

- PC mindset people that actively want to indoctrinate and teach others because they feel superior: 70% (of the 90%). a great example is Zachary Drummond who provided some mindblowing...erm...facepalming I mean...insights into his biogas inflated ego by posting "my IQ is 165 but I work at Subway making sandwiches" on his FB wall. on his LinkedIn page he also shows off with his "MS Office skills"...wow..I wonder why NASA didn't call him yet. or the "Pirateparty" boy Raymond Johansen who thinks writing like a 13 year old 4chan addict with down syndrome is hacky and cyber-hip: IT knowledge on the other hand: nada.

I have to admit being a member of the 2600 FB group can cause some self-running dynamics because you think you are getting real feedback when posting something, but when you look at the quality of feedbacks (content or people) I prefer to talk to the underarm fungus of the next homeless guy I meet, I am sure it's way more interesting...and out of the box.

More in this category: « How to evade gmail and facebook phone verification [Review] Mad Max - Fury Road »
Login to post comments
back to top